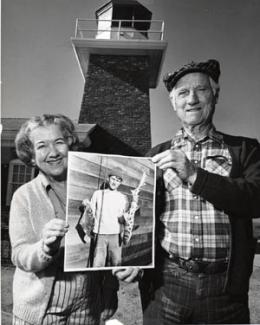 In her mid-nineties at the time of this interview, Esther Abbott achieved a long and impressive career as a photographer whose work was published in Arizona Highways and other publications in the 1940s and 1950s. With her husband Charles (Chuck) Abbott, she also shaped the urban landscape of downtown Santa Cruz through her historic preservation activities, and her advocacy on behalf of the pedestrian-centered Pacific Garden Mall, which was constructed in the late 1960s. This oral history, conducted by Evelyn Richards of the University Library's Regional History Project, illuminates the life and career of this remarkable and vibrant woman.

The University Library's Visual Resource Collection also has a collection of 4,700 slides of the Abbotts' photographs of architectural reconstructions of national urban and suburban landscapes in the 1960s. Their photographs of the buildings of Santa Cruz are of special importance to local patrons. In addition, Special Collections has a collection of Chuck Abbott's photographs documenting his time in World War I Europe, as well as his career from 1920 to 1935.