Russel and Karen Wolter: Down to Earth Farm

Read the full text transcript (PDF) of the oral history with Russel and Karen Wolter. 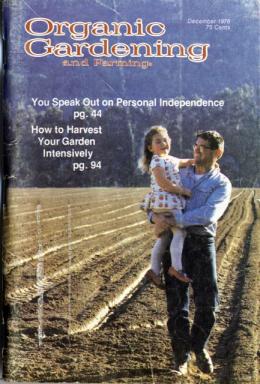 Russel Wolter and his daughter Karie on the cover of Organic Gardening and Farming magazine in 1976.

Born in Pacific Grove, the descendent of pioneers who came to California with the De Anza party in 1774, Russel Wolter has been farming “organically” since he was fourteen, when his mother forbade him to use chemical fertilizers and sprays on their ranch in the Carmel Valley. That was in 1947, decades before organic certification, but Wolter’s expertise in organic farming methods became a valuable resource to a newer generation of farmers who began farming organically in the 1970s. After his mother’s death, Russel and his wife, Karen, farmed forty-five acres of the family ranch as Down to Earth Farm, growing a variety of crops, including sweet corn, tomatoes, squash, red and white chard, kale, collards, cucumbers, apricots, plums, winter squash, pumpkins, and fava beans. They distributed their produce through Bud Capurro’s distribution company based in Moss Landing, California, and also sold directly at farmers’ markets in the area. Down to Earth Farm was part of the original organic certification program initiated by Rodale Press’s Organic Farming and Gardening Magazine in 1971. Russel was a founding member of California Certified Organic Farmers (CCOF) and received a Stewards of Sustainable Agriculture (Sustie) Award in 1994. Russel and Karen are now retired from farming, and lease their land to Earthbound Farms. Ellen Farmer conducted this interview with Russel and Karen at their home in Carmel Valley on March 28, 2007.