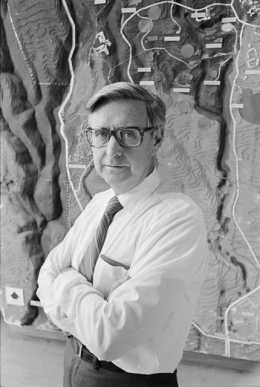 For the complete (full text) version PDF of Louis F. Fackler: Founding Campus Engineer, UC Santa Cruz (E-Scholarship). Includes complete audio (streaming or download) for the oral history. Note: Due to editing by the narrator and the Project, there may be minor differences between the audio recording and the transcript. Please quote from the transcript as the record and not the audio. Audio will be found under "Supporting Material."

Lou Fackler, founding campus engineer at UC Santa Cruz, was interviewed and hired by Founding Chancellor Dean McHenry. He was the campus’s eleventh employee and began work in January of 1963. This oral history chronicles Fackler’s twenty-eight years at UCSC. He began as campus engineer, became director of Campus Facilities in August of 1975, and finally retired in October of 1990. At the time of his retirement he had been promoted to associate vice chancellor, facilities/services with multiple responsibilities including: campus physical planning and construction for projects under construction or in the planning stage; operation and maintenance of the campus physical plant; campus transportation and parking; the campus fire department; environmental health and safety; and purchasing and receiving. In his interview, Fackler details the efforts it took to design and construct the infrastructure and buildings for a new and rather unusual UC campus, and then develop and maintain fire protection, campus housing, transportation, parking and other services over the first few decades of the campus.