To read the full text [PDF] of "Look'n M' Face and Hear M' Story": An Oral History with Professor J. Herman Blake. Includes complete audio (streaming or download) for the oral history. Note: Due to editing by the narrator and the Project, there may be minor differences between the audio recording and the transcript. Please quote from the transcript as the record and not the audio. Audio will be found under "Supporting Material." University of California's Escholarship Site. 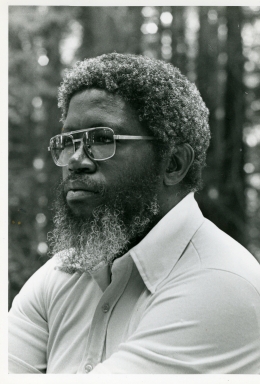 Professor J. Herman BlakeDr. J. Herman Blake arrived at UC Santa Cruz in 1966 as an acting assistant professor of sociology at Cowell College. He remained at UCSC for eighteen years, gaining renown both as a teacher and for his leading role in the formation of UCSC’s seventh college, Oakes. This oral history explores both the public biography of Blake’s career and the intimate biography of Blake’s own youth and education, addressing how he sought to make more room at the “table” of education for others and how he worked to get there himself.

Born in urban Mount Vernon, New York, in 1934, Blake relates the challenge in finding home in the context of a “slum” and its “counter-forces,” reflecting particularly on the strength of his mother as a “protector” in their living situations, which ranged from a series of houses to an abandoned storefront divided by beaverboard. He walks through his experience in the Seventh Day Adventist educational system, his military service as a conscientious objector in France, his ultimate enrollment in New York University as an undergraduate, and matriculation in UC Berkeley as a master’s and doctoral student. Throughout, he reflects on the stepping stones of this journey towards a “life of the mind,” such as the gap between his growing ambitions and the expectations of his family, and balancing his many roles as an aspiring sociologist, a family man, and associate of the Berkeley NAACP and Malcolm X.

Moving forward, Blake candidly reconstructs his career at UCSC, detailing the inspirational climate at early Cowell College and the ensuing development of Oakes College. The latter topic is a particular focus of these interviews, charting the evolution of Oakes from the initial demand for a black studies college to an ethnic studies model and to its ultimate structure, which went beyond explicit ethnic quotas and programs to embody Blake’s faith in liberal, cross-cultural education. He provides an interior perspective on the challenges, conflicts, and collaborations that characterized the early history of this groundbreaking institution, which connected with communities and individuals who had historically been marginalized, underserved, and “denied” by higher education.

The sessions move to a close with discussion of Blake’s educational philosophy, exploring his decision to focus on issues of educational access and retention as the core of his life work. They conclude with a meditation on the defining themes of Blake’s personal and vocational narrative, and a reflection on gratitude and meaning in his life today.

A supplemental interview focuses on the educational philosophy which Blake brought to UC Santa Cruz. This interview not only helps illuminate the history of UC Santa Cruz as a politically engaged campus with a tradition of extended undergraduate field study, but also connects the campus, and particularly Oakes College, with a larger history of grassroots education in transformational politics in the United States.