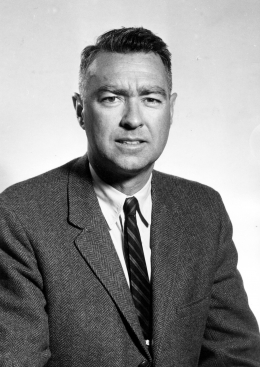 For the complete text of Harold A. Hyde: Recollections of Santa Cruz County (E-Scholarship). Includes complete audio (streaming or download) for the oral histories in this volume. Note: Due to editing by the narrator and the Project, there may be minor differences between the audio recording and the transcript. Please quote from the transcript as the record and not the audio. Audio will be found under "Supporting Material."

A fifth-generation Santa Cruz County resident, Hyde has been in on the creation of organizations and institutions ranging from UCSC and Cabrillo College to the Community Foundation and the Cultural Council of Santa Cruz County. His contributions to California and Santa Cruz are documented in his oral history.

Following infantry combat service with the U.S. Army in Europe during World War II and graduate studies in business at Harvard, Hyde returned to Santa Cruz County and a career at Ford's Department Store. By the late 1950s he was chairing a committee to promote a local bond issue for higher education, had been elected to Cabrillo College's first board of trustees, and was also on a local committee helping the University of California select a Central Coast location for a new campus. All this was in addition to his position as merchandising manager of Ford's.

After the UC Regents selected the Cowell property for their next campus and named Dean McHenry founding chancellor, McHenry approached Hyde and offered him the job as vice chancellor of business and finance. Hyde was responsible for the start-up of all nonacademic aspects of the new campus.

Central to Hyde's work was overseeing creation of UCSC's infrastructure, including construction of the first colleges, residence halls, and administrative buildings, and the siting of campus roads. He also hired key staff. Hyde held the vice chancellor position from 1964 to 1975, a period in which the campus grew from no students and some decaying ranch buildings to an enrollment of 5,600 students with modern classrooms, laboratories, residence halls, playing fields, performing arts theaters, and administrative buildings, including those for the Lick Observatory.

Hyde's commitment to UCSC continued after he returned to retailing in 1975. He was a founding member of two groups supporting UCSC, serving as the first president of the Arboretum Associates and a trustee of the UC Santa Cruz Foundation.