The Early History of UCSC's Farm and Garden 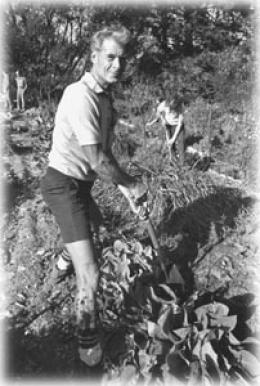 The early history of UC Santa Cruz's Farm and Garden

The Early History of UCSC's Farm and Garden documents the emergence of the organic gardening and farming movement in Santa Cruz. It includes interviews with Paul Lee, Phyllis Norris, Orin Martin, and Dennis Tamura, who were involved in the early years of the Garden. Maya Hagege, a former Farm and Garden apprentice and UCSC alumna, conducted the interviews, which were edited by Jarrell.

Established in 1967 by master gardener Alan Chadwick, the original site was a neglected 4-acre plot at Merrill College which he and his student apprentices transformed into a magnificent terraced garden. In this pioneering realization of organic gardening Chadwick taught students French intensive horticultural techniques, including the back-breaking labor of double-digging garden beds, the use of composting for enriching the soil, and the elimination of pesticides. The recollections of Chadwick describe the quixotic founder of the Garden, who inspired a generation of students who went on to launch the organic farming movement in Santa Cruz County and throughout the country. According to his friends and apprentices, his singular personality combined the qualities of a Pied Piper and a Johnny Appleseed, of a vexing and inspired visionary who taught his students to read the landscape of the Garden and to discover the interrelationships among land, climate, plants, and soil.

This early campus experiment subsequently evolved into the Center for Agroecology and Sustainable Food systems, now a respected academic program. Paul Lee was instrumental in assisting Chadwick found the Garden, and subsequently established the Chadwick Archive at Green Gulch Farm in Marin County. Phyllis Norris describes her experiences as a leading member of the Friends of the Farm and Garden and the development of the apprenticeship program. Orin Martin, a former apprentice, became manager of the student garden project in 1977 and has initiated a number of programs linking the community and the Farm. He also describes changes in the Farm's landscape and the variety of crops and fruit trees which have been cultivated over the years. Dennis Tamura, a Chadwick apprentice and the coordinator of the apprentice program from 1978-1985, provides a detailed account of Chadwick's unconventional pedagogy, his peregrinations in founding other gardens in California, and the evolution of the Farm and Garden.