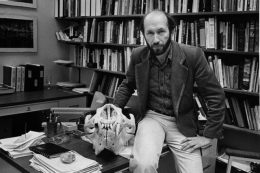 To read the full text [PDF] version of Burney Le Boeuf: Professor of Ecology and Evolutionary Biology, Recollections of UCSC, 1966-1994 (University of California E-Scholarship Version) Includes complete audio (streaming or download) for the oral histories in this volume. Note: Due to editing by the narrator and the Project, there may be minor differences between the audio recording and the transcript. Please quote from the transcript as the record and not the audio. Audio will be found under "Supporting Material."

Burney Le Boeuf was born in southern Louisiana. He attended UC Berkeley, earning his PhD in experimental psychology in 1966. While at Berkeley, he also studied zoology and experimental biology. He arrived at UCSC in 1967 as a member of the psychology board and of Crown College. He already had a strong interest in evolutionary biology and participated in the biology board’s meetings as an outside member. He also began working with biology professor Richard Peterson on seal and sea lion research. After Peterson’s death, the biology board invited Le Boeuf to take Peterson’s place on the board, and he accepted.

Le Boeuf is internationally known as a pioneer of the field of marine mammal behavior. He has focused on the social and reproductive behavior of elephant seals (Mirounga angustirostris), as well as their diving, foraging, and migratory behavior. Le Boeuf has conducted extensive research on the behavioral ecology and physiology of a variety of marine mammals, and also investigated the effects of environmental pollutants such as DDT on marine mammals.

Much of Le Boeuf’s research on elephant seals has been conducted at nearby Año Nuevo Reserve, which is only twenty-five miles north of Santa Cruz. Le Boeuf began doing research at Año Nuevo Island in the late 1960s. A team of UCSC undergraduate and graduate students worked with him. In 1975 the first elephant seal pup was born on the mainland on a beach managed by the California Department of Park and Recreation. The presence of elephant seals, the largest males of which weigh up to 4500 pounds, fighting, mating, and giving birth on a public beach within an hour’s drive of the San Francisco Bay area was publicized by Sunset Magazine. The article quickly drew thousands of excited visitors to come see the seals, a few posed their children literally on top of the seals for photos, many approached the seals too closely for safety, and generally put both themselves and the seals in danger. The one part-time ranger assigned to the area was completely overwhelmed.

Professor Le Boeuf stepped in with an offer of student help from UC Santa Cruz. He designed Natural History of Año Nuevo, a two-quarter experiential course offered through the environmental studies board. The first quarter, students studied the history, botany, intertidal biology, ornithology, geology and other aspects of the Reserve; the second quarter they served as trained docents, each leading tours one day a week for groups of visitors, including children from local schools. My time participating as an environmental studies student in 1981 in Le Boeuf’s course and docent program was some of the most rewarding I spent as an undergraduate at UCSC. Not only did I gain valuable interdisciplinary knowledge of natural history, but working as a docent built my confidence in public speaking and skills as an educator.

The population of elephant seals who returned to Año Nuevo Reserve to breed grew an average of 16 percent per year between 1975 and 1995, to a high of 2041 pups born on the mainland in 1995. The size of the colony has since reached equilibrium, probably because elephant seals have recolonized other areas such as Big Sur (Piedras Blancas) and Point Reyes. Meanwhile, the robust docent program, which was staffed for many years by Le Boeuf’s UCSC environmental studies students, is now staffed by trained volunteer naturalists. The State Park System remodeled one of the old dairy barns to include a new visitor’s center with extensive interpretative exhibits. Gone is the funky trailer the docents took shelter in between tours back in my student days.

In addition to his research at Año Nuevo, Le Boeuf has also led expeditions to research sites throughout the world, including Mexico, Argentina, the Galapagos Islands, and Japan. He has authored over 157 peer-reviewed articles and three books. He is currently serving as the Associate Vice Chancellor for Research at UCSC.

This oral history was conducted in two separate interviews, twenty years apart. The first interview was conducted by former director of Regional History Randall Jarrell on July 12, 1994 as part of a series of interviews with faculty retiring as part of the VERIP [Voluntary Early Retirement Incentive Program] available at that time. It was quite a short interview (37 transcript pages) and both Professor Le Boeuf and I felt that it would be useful to do a follow up interview, particularly about his work with Año Nuevo Reserve, which was only touched on briefly at the end of the 1994 interview. That follow up interview was conducted on January 16, 2014.