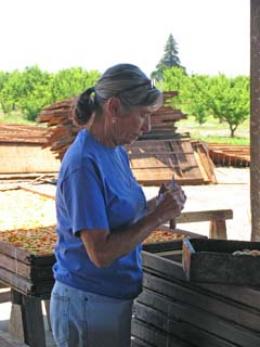 Born in 1932 to Croatian American farmers in the Santa Clara Valley town of Cupertino, Betty Van Dyke saw her fertile home ground transformed, in a few decades, from seemingly endless orchards to unrelenting urban sprawl. As the energetic matriarch of a popular family-run fruit-growing business, she has since participated in the region’s organic agricultural renaissance, overseeing one of the first California operations to grow and dry fruit organically (becoming certified in 1986), and playing an active role in the early days of California Certified Organic Farmers (CCOF). And as a member of one of the region’s noted surfing families, she built this thriving business while sustaining her love affair with Pacific ocean waves.

Van Dyke Ranch sits at the base of the Gavilan Mountains in Gilroy, Santa Clara County, on a southern exposure perfectly suited for growing sweet, flavorful Blenheim apricots and Bing cherries. The ranch produces fresh fruit in season and dried apricots, cherries, nectarines, peaches, pears, and persimmons throughout the year. (A rarer delicacy available to a few farmers’-market patrons are home-grown capers, the pickled flower buds of plants propagated from a thirty-year-old bush planted by Betty’s mother.) Betty Van Dyke and her three sons took over from her father in the mid-1970s. While son Peter and various grandchildren now carry most of the day-to-day responsibility for the ranch, Betty still holds down two weekly farmers’-market booths, and commutes frequently to Gilroy from her Santa Cruz home to help with ranch work during busy seasons.

Sarah Rabkin interviewed Betty Van Dyke at Rabkin’s Soquel home on April 16, 2008. A lively storyteller with an easy smile, Van Dyke shared memories of picking apricots on her grandfather’s farm as a small child, working and playing alongside migrant dust-bowl refugees from Oklahoma and Arkansas, discovering surfing as a college student in the 1950s, and running an evolving Van Dyke Ranch.